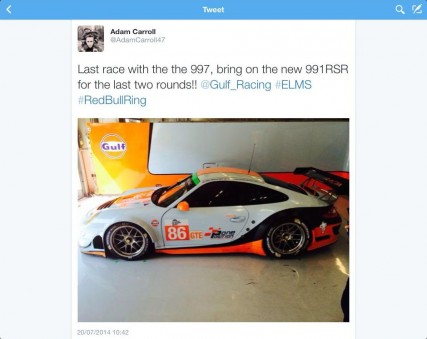 According to a tweet this morning from Adam Carroll, Gulf Racing UK will replace the current Porsche 911 GT3 RSR (Type 997), #86 in the ELMS GTE class after the Red Bull Ring round. The team will use a new Porsche 911 RSR (Type 991) in the last two rounds of the European Le Mans Series (ELMS).

The #86 is normally driven by Adam Carroll, Gulf Racing UK co-owner Mike Wainwright and Ben Barker (although Michael Meadows races in his place at the Red Bull Ring as Barker is involved in the Porsche Mobil 1 SuperCup at Hockenheim this weekend).